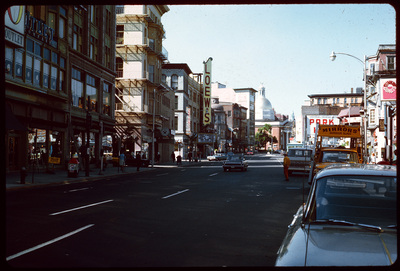 Weybosset St. in Providence featuring Loew's Theater and the Beneficent Congregational Church. Loew's was threatened with demolition in 1977 and it was saved by a consortium of local businesses, foundations and government agencies. In 1978, the building reopened as the Providence Performing Arts Center. The Beneficent Congregational Church was built in 1809 by Bernard, Eddy, and John Newman and was remodeled in 1836 by Tallman & James C. Bucklin.