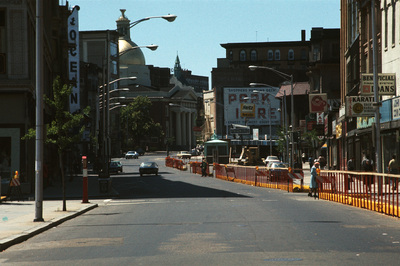 Weybosset street pictured in the late 1970s. Loews Theater and Beneficent Congregational Church can be seen. While most of Loews eventually became the site of PPAC, Beneficent is the oldest building on the block, having existed since 1809 as a separatist parish. These photographs are taken around many redesigns of downtown's streets, such as Westminster's time as a pedestrian zone, and this current indication of a one way on Weybosset.