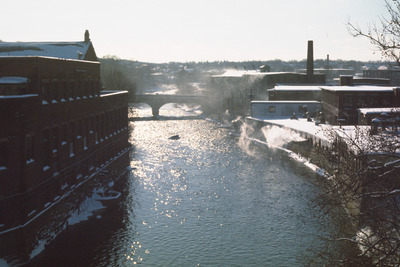 Even before it was officially incorporated as a town in 1867, Woonsocket was home to numerous textile industries because of the water power provided by the Blackstone River. However, the industry ended after the Great Depression and the city had to adapt to retail and light manufacturing. This photograph shows some of the remaining factories in the late 20th, some of which have since been demolished. The Court Street Bridge was dedicated in 1895, at the time Woonsocket was a booming economy and the celebration included an electric light show and a speech by Mayor Aram J. Pothier which catalogued Woonsocket’s assets.