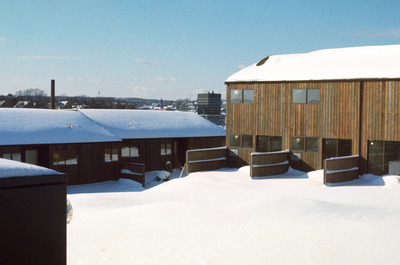 Woonsocket under went a revitalization process in the 1970s, specifically in an area known as the Social Flatlands. This photograph shows Woonsocket Village, a housing development that replaced neighborhoods that had formerly been multiple family mill homes. On the horizon is the Marquette Building. Completed in 1975, it is a 10 story steel and glass tower that came to symbolize the rebirth of Woonsocket.