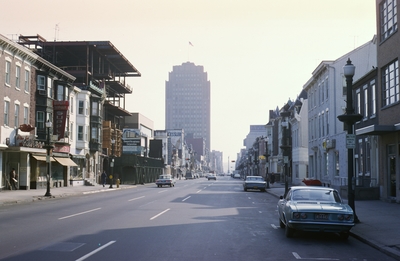 The street lights on Hamilton St. were installed in 1916 and remained until the 1970s when revitalization ended up junking the ornate lamp posts. The flower bowl lamp posts were suggested by Mayor Alfred L. Reichenbach’s wife, Maude, after returning from a trip abroad. This photograph, taken in 1965, shows the original posts. In the 1990s the city sought the original manufacturer of the lamp posts and had them recreated exactly. The tall building on the horizon is the Pennsylvania Power & Light building. Completed in 1928, it remains the tallest building in Allentown and is embellished with exterior designs by Ukrainian sculptor Alexander Archipenko.