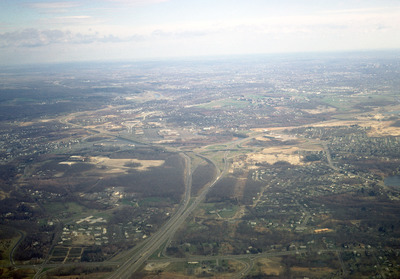 Although now considered a dead mall, the construction of the Midland Mall (renamed the Rhode island Mall in 1985), completed in 1968, was a milestone in the states economic history as it initiated the shift of retail trade from Providence into the suburban neighborhoods of Warwick. The Warwick Mall, also visible here, as completed in 1972 (under construction in this photograph). Also completed in 1972 was the Knight Campus of Rhode Island Junior College (later renamed the Community College of Rhode Island). Overlooking the nearby highways from a hilltop, the structure has earned international recognition for it’s innovative modernist architectural form.