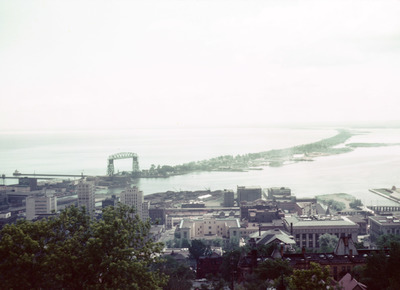 Skyline Parkway offers a bird’s eye view of the port city of Duluth. In this photograph, made in 1964, Duluth’s Aerial Life Bridge is visible, a landmark of the city. The construction of the Duluth Ship Canal in the late 19th century made it necessary for residents on Minnesota Point, now an island, to access the mainland, and eventually lead to the construction of the Aerial Lift Bridge. It was originally built as a transporter bridge, an extremely rare design which is essentially a gondola. Originally opened in 1904, the bridge spans 120 m connecting Minnesota Point to the mainland. In 1929 it was rebuilt to it’s present aerial lift design, which better accommodates automobiles.