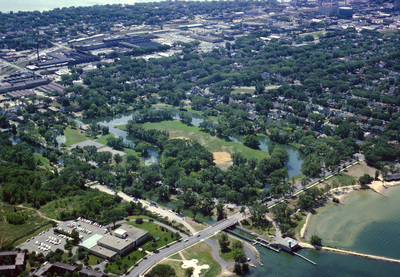 The Yahara River is a tributary of the Rock River that connects all of the lakes around which Madison was built. This photograph shows a section of the stream that passes Tenney Park, a public park named for the local lawyer, Daniel K. Tenney, who purchased the land in 1899. The lake at the bottom of the photo is Lake Menton and at the top is Lake Monona, both of which are connect by the Yahara River.