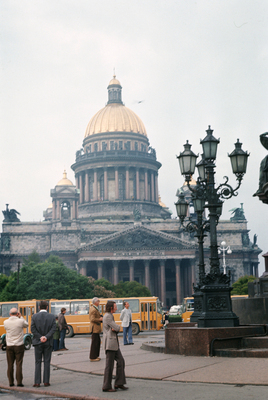 While multiple versions of St. Isaac Cathedral had been attempted in the 18th century none had been completed to specification. At the beginning of the 19th century Alexander I commissioned this final, and much more grand vision of the Saint Isaac's cathedral, which broke ground in 1818. Designed by French architect Auguste de Montferrand, the plan originally resembled Kazan Cathedral, but over the forty year construction period the design was altered so many times that the finished St. issac’s bears little resemblance to the earlier structure. Additional architects, including Carlo Rossi and Vasily Stasov, were added after numerous structural defects appeared in de Montferrand’s original design. Although St. Isaac is a neoclassical structure it shows signs of the trend toward eclecticism that was to dominate Russian, and European, architecture in the second half of the nineteenth century. During the Soviet Union the religious aspects of the building were removed and, for a time, it was turned into an Antireligious Museum. Since the fall of the Soviet Union it has resumed regular religious activity. The design of the dome and building was influential on later structures, notably the United States Capitol in Washington, D.C.