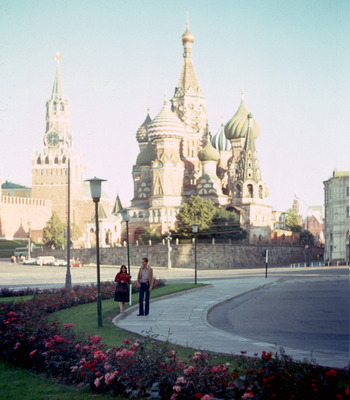 The original Russian builders are thought to be two Russian architects Barma and Postnik, although this is disputed by some since there are no official records indicating exactly who build and designed the cathedral. Overtime, eight side chapels were built around the building to “illustrate the eight attempts to take Kazan” (Berton, 42). The architects insisted that for the sake of balance, a 9th chapel be built as well. A final tenth chapel was erected in 1588 over the grave of saint Vasily Basil.

The building’s design is supposed to signify flames rising into the sky. The architectural design of the cathedral is unique to the Russian designs of the area in which it was built. Sources of its architectural style are disputed. Some think the structure of the cathedral’s roots come from Byzantine and Asian influences while others believe that they blend early Muscovite elements along with the influence of the Italian Renaissance.