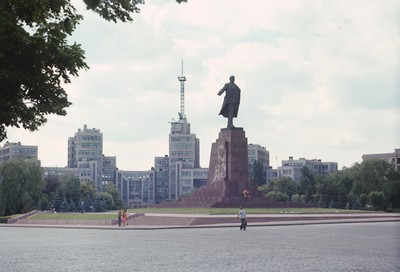 Chet Smolski describes this building as a science research building of the 1920s. This building is part of Karazin Kharkov National University. The park from which the photo was taken is called Svobody Square or Freedom Square. The building is a prime example of Constructivist architecture. It features skywalks that probably derive from El Lissitsky’s Skyhook of the 1920s, although the buildings are not horizontal skyscrapers. When built it was the tallest skyscraper in the U.S.S.R. It was financed by order of Feliks Dzierżyński and cost 9 million rubles.

Freedom Square used to be known as Dzerzhinsky Square after Felix Dzerzhinsky, who was the founder of Communist Russia’s Cheka, or secret police. The square was renamed Freedom Square after Ukraine became independent from Russia in 1991. Freedom Square is the main square of Kharkov and it is the second larget city-center square in Europe. This statue of Lenin was erected in 1964 and remains standing to this day.

See Reyner Banham Information from www.answers.com/topic/Kharkov The contact for info. on this building is Igor Bolotny: igor.a.bolotny@univer.kharkov.ua “The reconstruction and renovation of the Derzhprom building took more time (7 years) than the construction of the building itself. (3 years)”