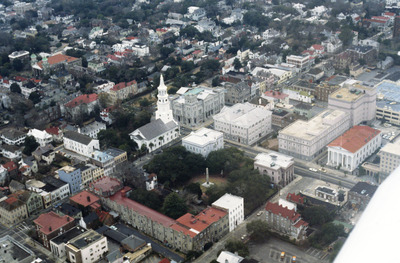 The intersection of Broad and Meeting, seen here in this aerial photograph, is known as the Four Corners of Law, because of St. Michael’s Church (Divine), City Hall (local), the Charleston County Courthouse (County), and the U.S. Post Office and Courthouse (Federal).

St. Michael’s Church (1752-61) is the oldest religious structure in the city. It was designed by an architect by the name of Gibson (Simons & Lapham) and continues to be an active Episcopal church.

The Charleston City Hall, just to the north of St. Michaels Church, is attributed to Gabriel Manigault, who designed the building in the federalist style denounced by architect Robert Mills as “showy.” (Poston 167). Completed in 1804, the building was renovated several times during the nineteenth century, including renovations by architect Charles Reichardt.

Across from the face of St. Michael’s is the U.S. Post Office and Courthouse, designed by John Henry Devereux, was completed in 1896 and features the style of the Renaissance Revival with a prominent cornice, balustrades, and quoins. The building is made of granite from Winnsboro, South Carolina.