Bethlehem : Church of the Nativity 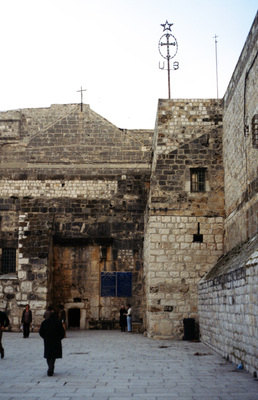 This picture was taken at an angle from Manger Square of the Church of Nativity in Bethlehem, Israel. Since its initial construction in 326 AD, the church has undergone much reconstruction and restoration over the years. Built over the cave that is believed to be the birthplace of Christ, this church remains one of the oldest active churches in the world.

The entire structure combines two churches, conjoined by and underground crypt (the Grotto of the Nativity). The Basilica of the Nativity resembles a Roman basilica, with golden mosaics, aisleways formed by Corinthian columns and an apse. From the sanctuary, there are two staircases that wind down to the Grotto. The Church of St. Catherine, which is attached to the Basilica, models the Gothic revival architectural style.