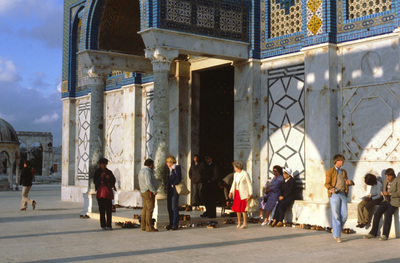 The Dome of the Rock was the first artistic endeavor of the Umayyads, and is the earliest surviving example of an Islamic monument. The architecture was meant to rival the splenduer of contemporary Christian and Judaic architecture. The building’s style takes from Christian buildings of late antiquity and Byzantine architecture.

This photograph shows the detail of the outside wall, which is covered in Turkish tiles. The tiles were added during Ottoman times and replaced the original mosaic, which was also incorporated marble.