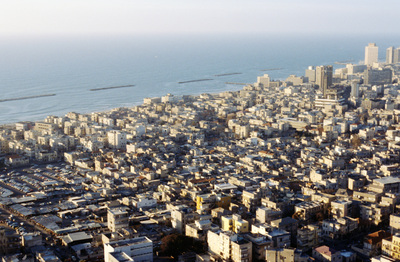 This photograph (1 of 6) shows the Tel Aviv beach, a major economic asset to the city, which was realized as early as the 1920s. Also pictured is the dense development of architecture in the International and Bauhaus style that have become the image of the city.

Tel Aviv quickly earned the nickname the White City, and from this photograph it’s easy to see where it came from. The city’s architecture is overwhelmingly in the International and Bauhaus style. The architecture is designed to favor function over form. The functionalism of Tel Aviv’s architecture compliments the socialist aesthetic of 1930s and 40s Zionist political mentality. The International style embraced in Tel Aviv is now understood to be a perfect match for the Zionist project.

The nickname “White City” is not without controversy, and debates over Tel Aviv’s double image as White City and Black City have emerged in recent years. Namely, the term Black City referring to the disadvantaged south.