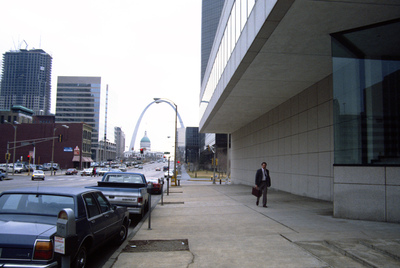 This photograph looks east on Market St. in St. Louis toward the Gateway Arch. The Gateway Arch was completed in 1965 and was built as a monument to western expansion in the United States.

To the left is the Gateway Mall, an area of open space intended to provide an unobstructed view of the Gateway Arch. The construction of the mall caused several historic buildings to be razed, yet in 1986 the Gateway One building was built in place despite its criticisms that it caused the very problems that lead to the destruction of the older buildings.

Also visible in this photograph is the final stages of construction on One Metropolitan Square, completed in 1989. This building is the second tallest in Missouri and the tallest in St. Louis.