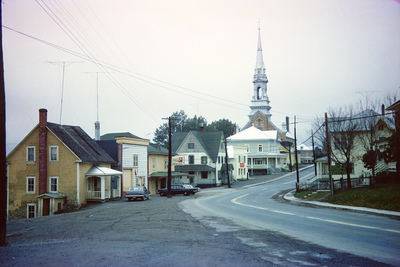 Cabano is a small town in the Canadian province of Quebec. In the twentieth century it experienced several devestating fires. In 1950 a fire destroyed over 100 homes. This 1965 photograph shows a house with a ladder on the roof, a fire prevention measure.

In 1966, a year after this photo was taken a local saw mill, which was also a major Cabano employer, burned sending the city into years of economic uncertainty.

Two fires set by the same person were started in the 1970s. One in 1972 burned a local church to the ground. It is uncertain whether that church is the same shown in this photo. The other fire in 1973 burned the Sacred Heart College.