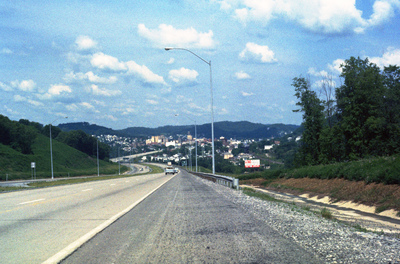 Clarksburg is a city in West Virginia with a population of 16,578 at the 2010 census. This 1981 photograph, taken on U.S. Route 50 shows the approach to the city and the hilly terrain that the city is built within. This section of Rt. 50 is part of Corridor D in the Appalachian Development Highway System. The system was established in 1965 to boost economic growth in Appalachia.