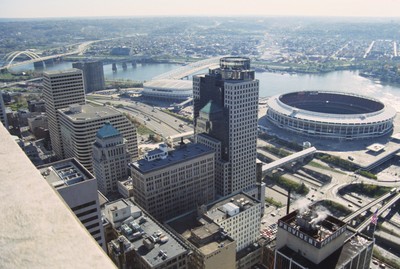 Riverfront Stadium (1970-2002), renamed Cinergy Field in 1996, was the home of the Cincinnati Reds National League baseball team and the Cincinnati Begals National Football team. It is one of many so called “cookie-cutter” stadiums built in the late 1960s. Completed in 1970, the stadium was part of a campaign to save the city money by having a baseball and football team share the same stadium. Cinergy Field was demolished in 2002 when the Cincinnati Reds, the only team still using the field, moved to the newly completed Great American Ball Park.