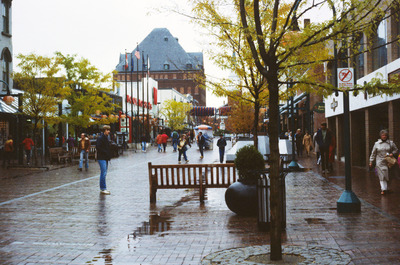 Looking north on Church Street, the Masonic Temple, designed by Wilson Brothers & Company, towers over the Burlington Square Mall, now known as the Church Street Marketplace. It is a pedestrian mall that occupies four blocks in Burlington opened in 1972.

The Masonic Temple is constructed in the Romanesque Revival style and was completed in 1898. It was sold in 1983 and underwent renovation, and this photograph of October 1983 shows the building with boards covering all of it’s windows. The building, in addition to retail and office space, continues to host Masonic Lodge meetings and ceremonies.

Beside the temple, partially obscured by the folliage here, is the First Unitarian Church, designed by Peter Banner and built in 1816.