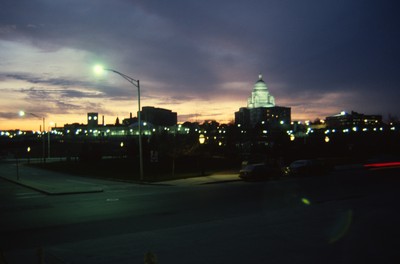 The newly built Providence Station and State House from Canal St. The lighting on the State House's dome (fourth largest self-supporing dome in the world) is well-showcased here. There is a reflecting the glow of the sunset and of its own bright illuminated white marble that surveys the land that surrounds it. This photograph takes place soon after the completion of Providence Station, whose dome may be smaller and less-illuminating, but deliberately compliments its nearby partner.