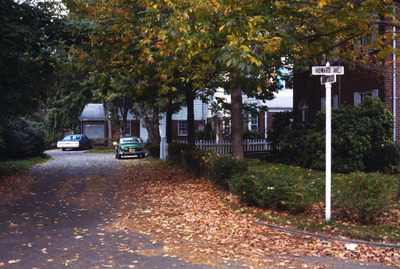 Radburn, a planned community that was founded in 1929, was based on England’s Garden Cities. This photograph was taken on Howard Ave, named for Sir Ebeneezer Howard, whose 1898 publication Garden Cities of To-morrow influenced urban planners to design communities where people and nature lived in harmony with one another. Although Radburn is billed as, “A Town for the Motor Age,” the narrow streets and houses in close proximity have had trouble accommodating an era where most families own multiple vehicles.