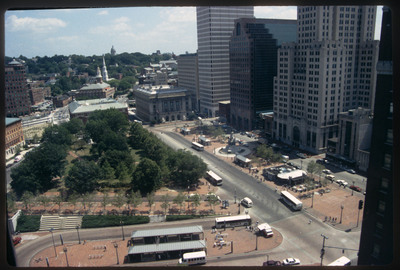 The area that comprises Kennedy Plaza and Exchange Terrace has been so constantly reworked that hardly ten years passes without its appearance being significantly altered. First created as Exchange Place outside of the train station in 1848, the site’s present spatial arrangement dates to 1898. In the late 1970s funding became available to create auto-free urban zones, and so Kennedy Plaza (renamed in 1964 after the president) became “virtually a large al fresco bus station.” (Woodward, 98). Clarke and Howe’s granite and steel Beaux-Arts Federal Building (1904-1908) sits as “fitting pendant” at the opposite end of the mall from the City Hall (Jordy, 37). Construction required the relocation of railroad tracks and the bridging of the Providence River during much of the 1980s and 1990s revitalization efforts of Providence.