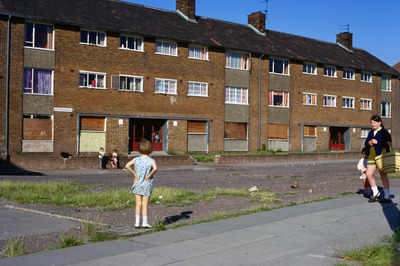 This image shows low-income housing in Kirkby, a town in the Metropolitan county Merseyside. This slide is labeled as ‘slum housing’. Kirkby, which was once largely farmland, experienced massive growth following the destruction in Liverpool during World War II. From 1951 to 1961 Kirkby’s population swelled from 3000 to 52,000. This massive influx caused many problems for residents and the town as the population grew far quicker than accommodations could be made.