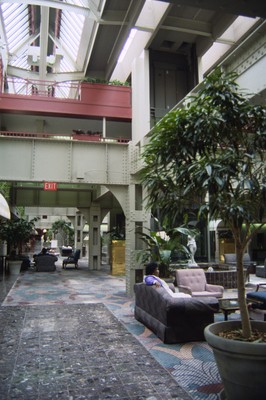 Interior photograph of the Crowne Plaza Hotel at Indianapolis Union Station. The hotel is located in the train shed which was completed in 1915. Following World War II the station saw rapidly declining numbers in passanger service fell increasing to a state of disrepair through the 1970s. In 1982, Indianapolis Union Station was added to the National Register of Historic Places. To give the building new use, in 1984 Woollen, Molzan and Partners were hired to redesign the station as a festival marketplace. The Crowne Plaza hotel was added at this time in the train shed, including twenty six rooms in refurbished Pullman cars.