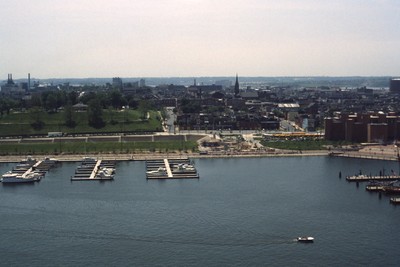 The Maryland Science Center (MSC) was built in the Inner Harbor in 1976, but grew from the Maryland Academy of Sciences formed in 1797. When the MSC opened in June 1976 it had both interactive exhibits and a state of the art planetarium. Since then there have been several additions made in 1986, 1987, and 2004. To the east (frame left) of the museum is Federal Hill Park.