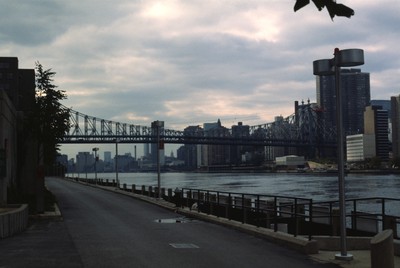 Roosevelt Island is located between Manhattan and Queens in the East River. The Queensboro Bridge crosses over the island, pictured at the left of the photo. Roosevelt Island has had many names over the years and once served as grounds for a state penitentiary a asylum for the mentally ill, and the first hospital to treat smallpox sufferers in the country.

During the early 20th century, the island was virtually abandoned. Mayor John Lindsay commissioned a redevelopment plan for the island in 1968. The design for the island created by Philip Johnson and John Burgee was displayed at the Metropolitan Museum of Art. The island was named Roosevelt Island in honor of President Franklin D. Roosevelt in 1973 by Governor Nelson Rockefeller and Mayor Lindsay. Redevelopment began on the island in the mid 1970s which included the creation of several housing complexes and an aerial Tramway for transportation. A subway station was added in 1990.