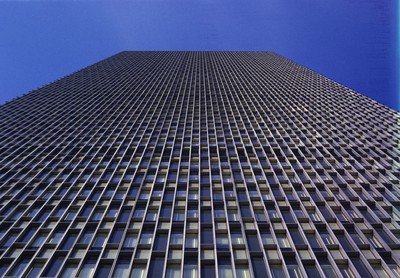 Seen here in a vertical photograph is the facade of the Prudential building in Boston, Massachusetts. The tower consists of 52 floors of office space built in 1964. The Prudential tower is part of a complex referred to as the Prudential Center. The building, which is the second tallest in the city after the John Hancock tower, was designed by Charles Luckman and Associates in 1964. It has received much criticism since its induction for its poor placement and overall "bad" design features.