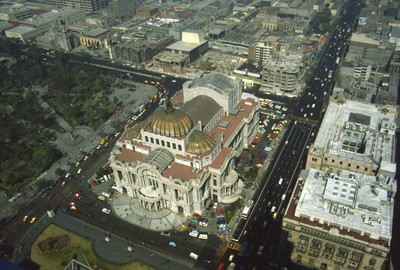 The Palacio de Bellas Artes, the Palace of Fine Arts, in Mexico city was constructed in the early 1900s. President Porfirio Diaz wanted the building to commemorate Mexico’s independence from Spain. When a revolution broke out in 1910, construction of the Beaux-Arts palace designed by Italian architect Adamo Boari was halted. Construction was finally completed in 1934. The Palacio de Bellas Artes houses a theater, the Palace Museum, and the National Museum of Architecture.