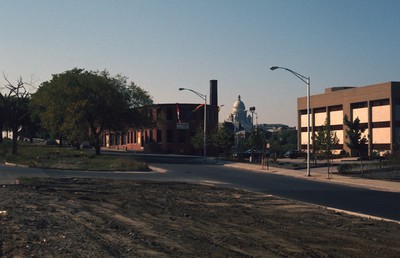 The intersection of North Main and Hewes Street was the location of the Moshassuck Arcade. The building was part of the Bay State Mill, which was part of a complex including the American Screw Company. Many of the surrounding buildings in the complex were destroyed by fire in 1971. The Moshassuck Arcade was the first rehabilitation construction project awarded a tax credit in the state of Rhode Island.

More recent construction to the the building included the removal of the smoke stack depicted in the photo. The building now houses medical offices.