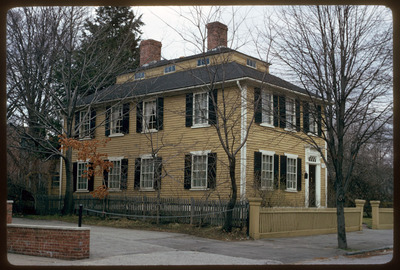 John Holden Greene built two houses neighboring each other on Power Street. The first of two, pictured here, was built for James Burrough at 160 Power Street. Greene was known for his monitor-on-hip-roof which he featured in this small-scale home. Burrough was a officer at the custom house and his family, who owned several houses in the area, also commissioned work from Greene.

Greene later built a home for himself beside the Burrough home at 150 Power Street. Greene’s home was later relocated one lot over in 1950 to make room for dormitory housing for Bryant College.