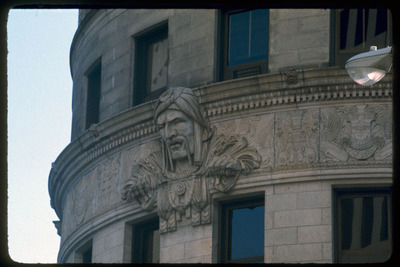 The Turks Head building was designed in 1913 by New York architects Howells & Strokes. The building was erected by the Brown Land Co. as an investment for members of the Brown family, and was part of a highway improvement plan that would encourage more useful road relocation movements in the future. A portion of the original lot was taken by the city for widening the highway at the street intersection. The Turk's Head which has been familiar to nearly every resident of the state for more than three generations graces its origin back to the days when signs, instead of numbers, were used by business houses to guide and attract customers.