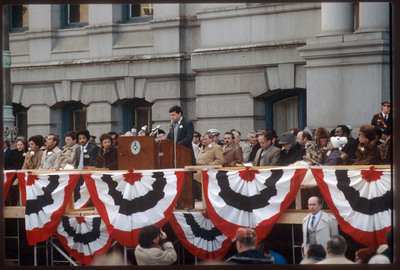 On January 3, 1983, Vincent A. “Buddy” Cianci was inaugurated as Providence’s mayor for his third term. Having held office for more than 21 years, Buddy is the longest serving mayor of Providence, including during the city's, “Renaissance phase.” Cianci pushed for he completion of several projects, including the Providence Place Mall, the Fleet Skating Center, and a new train station. His first administration ended in 1984 after he was convicted of assault. His second stint as mayor ended when he was convicted of one count of racketeering conspiracy, for which he served five years in federal prison.