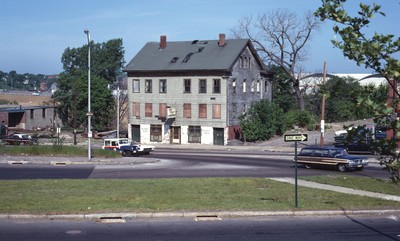 This is the old Bull Dog Tavern built in 1798. This tavern may have given the name to the area as Bull Dog Square, later Randall Square. It survived the fire that took the American Screw Company in July 1971. Richard Smith of Smithfield, RI took up the tavern’s ownership in 1820. During this time, Richard utilized the large assembly room to conduct religious meetings on Sundays, which eventually gave rise to the Fourth Baptist Church Society.