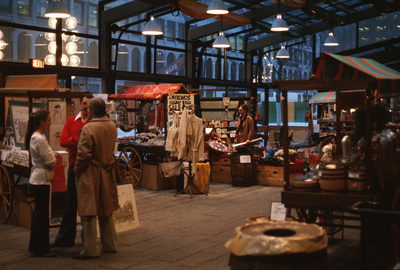 Faneuil Hall in Boston was expanded in 1826 to include Quincy Market, which was designed in the Greek Revival Style and later named after Major Josiah Quincy. The market became run-down in by the mid-twentieth century. In 1976 it was revitalized by Jim Rouse, architect Benjamin Thompson, and major Kevin White, becoming a hub for shops, restaurants, and outdoor entertainment