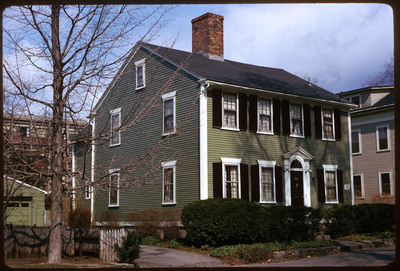 Woodward describes the Thomas Aldrich House as an asymmetrical four bay Federal style house. It was moved to Power Street from 39 Benevolent Street in 1950 to make room for the Wriston Quadrangle of Brown University. While it was built by Aldrich, a painter, the house was occupied by Sarah Helen Whitman as a literary salon, seance parlor and sanitarium for her sister. Sarah Helen is best known for her relationship with Edgar Allen Poe during the 1840s when she lived in the John Reynolds House at 88 Benefit Street. The house has an excellent classical entrance with a pediment, flanking pilasters and a semi-circular fanlight.