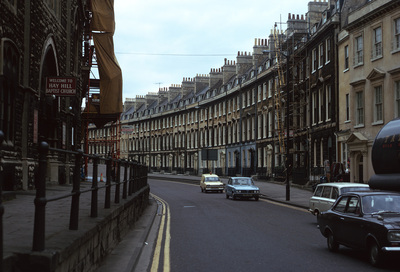 The layout of the city of Bath was established by John Wood the Elder from 1728 to 1775, where he and then his son, John Wood the Younger, transformed Bath's townscapes to reflect Roman architecture and planning. This particular street is known as The Paragon, due to the terrace lining the mansard rooftops. The Paragon was designed by Thomas Warr Attwood, an architect as well as a politician, who was Mayor of Bath in 1769. His Georgian townhouses were built in 1768 and the Georgian architecture references classical themes from Greece and Rome as well as techniques from the Renaissance.