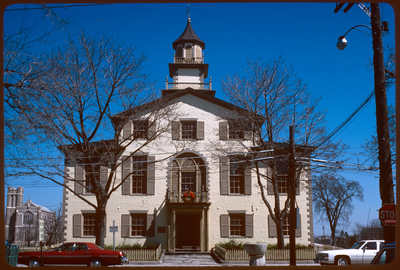 Now known as the Bristol Statehouse, this structure was constructed in 1819 as Bristol County Courthouse and, until 1854, it served as one of Rhode Island's five state houses, which were used in rotation by the governor and legislature. The building's design has received mixed attribution, architectural historian William Jordy notes it "has been attributed to John Holden Greene (and less convincingly to Russell Warren)." Originally brick, the walls were stuccoed in 1836, and furthered remodeled by Wallis E. Howe, as part of the WPA, in 1934-35. Today the building is owned by the Bristol Statehouse Foundation, who has dedicated itself to preserving and restoring the site for a historic and educational purposes.