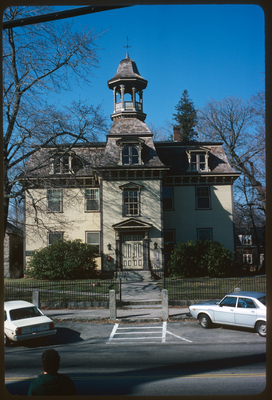 Constructed to replace the original Kings County Courthouse in 1775, this building is now the Kingston Free Library and Little Rest Archives. Between 1776 and 1791 it served as one of five state houses used in rotation by the governor and legislature of Rhode Island. Between 1842 and 1854 this house was used biennially as the state house. The original structure was a large barn-like building with the existing bell cupola atop. In 1876 the mansard roof was added, with the cupola being raised to fit above it. The double door entrance also dates from the 1876 remodeling. Since 1971 it has been home to the Little Rest Archives, the name of which reflects the original name of Kingston Village, Little Rest, taken from the, "supposed sojourn of soldiers just prior to the Great Swamp Fight." This photograph shows the structure as it existed in 1980.