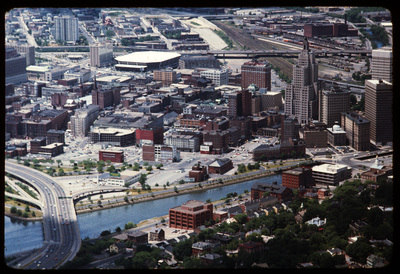 This 1970s view of Providence shows how the former route of Interstate 195, along with the railroad yard behind Union Station, isolated downtown Providence from the surrounding neighborhoods. The downtown area, connected by the border of its rivers, is imperative to understanding the formation of Providence. As Providence underwent many renewals and revivals over the next thirty years Smolski documents it, the reliance on the Moshassuck and Providence rivers for industry is the entirely why the city aligns itself to their borders.