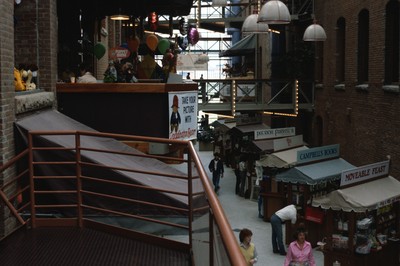 Home to the Davol Rubber Co. from 1884 until 1977, the complex were rehabilitated and reopened for mixed retail and office use in 1982. However, despite high occupancy and easy highway access, the shops slowly disappeared and the mall closed down in 1991. Davol Square was Providence’s first attempt of converting factory space into retail/office use based on the model of San Francisco’s Ghirardelli Square (1962) and was meant to rival Boston’s Quincy Marketplace/Faneuil Hall which opened in the late 1970s. According to Jordy, the most original aspect of the complex is the overhead glazing of an alley between three- and four-story buildings which had created the core shopping arcade. Since the 1990s, the buildings have reverted as a permanent display center for the wholesale jewelry trade and is therefore closed to the public.