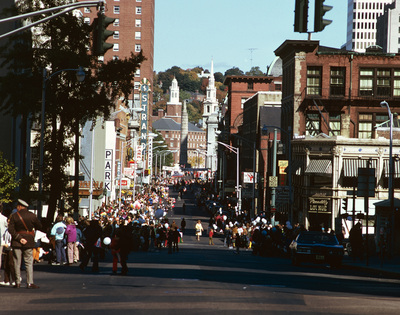 A street celebration on Washington Street, in honor of Columbus Day. Most buildings well-pictured here have been as redeveloped and renewed (as well the street itself) such as the Strand Theater, Majestic Theatre (Trinity Square Repertory), and Packard Motor Car Company. Where Strand was already in decline business-wise, the Majestic was renewed by the Trinity Square Reperatory company, and it and the Packard Motor Car Company building line the corner of Washington and Empire. They complement each other for the view down the street towards the east side and WWII memorial with their distinct terra-cotta detailing.