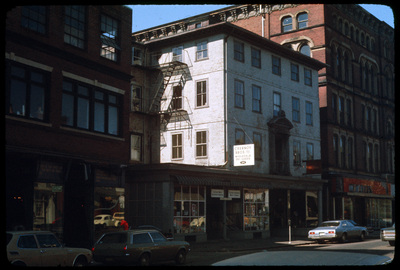 The Joseph and William Russell House was a once-handsome and sophisticated dwelling of the 18th century mercantile elite in the late Georgian Style, and is the earliest remaining example of the kind of three story, cubicle brick houses that were built to symbolize in 18th century Providence. By the 20th century it was being used as a rooming house. It was raised a full story and now sits above a storefront. Surviving is the original Corinthian, segmental arch-pediment entrance.