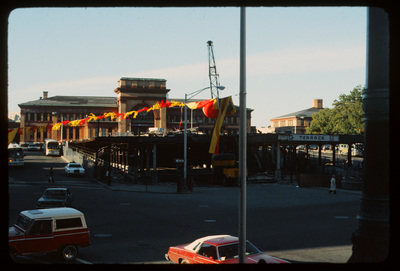 This photo was taken in 1979 and shows the deconstruction of a parking garage in front of Union Station on Exchange Terrace. Union Station was designed by Stone, Carpenter, and Willson in 1893 and constructed three years later by the New York, New Haven & Hartford Railroad. The station was the main terminal of the Providence train station from 1898 to 1986. A massive fire occurred in 1987 and nearly destroyed the entire building.