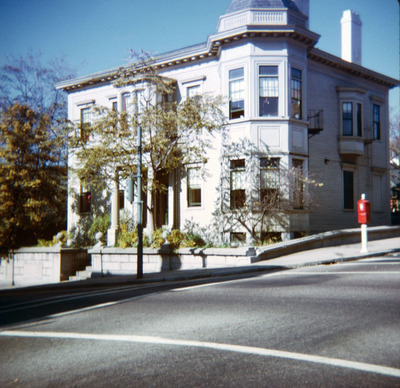 The former home of John Barstow at 60 Waterman Street in the College Hill neighborhood. The East Side is also home to Brown University, the Rhode Island School of Design, and several historic homes and buildings. John Barstow (1791-1861) was a wealthy 19th century merchant and business man. In 1838 he withdrew from his New York based firm, C & J Barstow, and relocated to Providence, RI, the birthplace of his wife, Sarah Swoope (1794-1868). In Providence, he became interested in the manufacture of steam engines and went into business with the firm Clarke, Fairbanks & Co. which eventually merged into the firm of Corliss, Nightingale & Co. He was later the second president of the Providence and Worcester Railroad. He was also, for several years, the president of the Commercial Steamboat Company, facilitating trade between the Providence and New York City. In addition to his involvement with these, and other companies, he was the president of the Exchange Bank (see: ID# 4806, Exchange Bank Building) for thirteen years until his death in 1861.