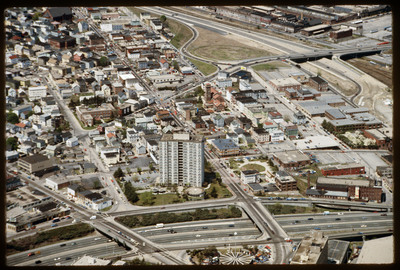 The Federal Hill neighborhood is home to approximately 8,000 residents and has been the traditional center of Rhode Island’s Italo-American community. Todays it is notable as a popular dining and nightlife destination. This photograph shows the arch and La Pigna (Albert Veri Associates,1979) sculpture of welcome on Atwells Avenue. The arch and pine cone sculpture (often mistakenly referred to as a pineapple) is one of the most recognizable Providence landmarks and creates a portal between downtown and the Hill. The high-rise in the center of the photo is Sister Dominica Manor (a.k.a. The Bradford House, 1966) which serves as elderly housing. Broadway, another Providence thoroughfare, appears to the lower left. Former trolly routes, Atwells Ave. and Broadway are spoke-like streets emanating from downtown. Westminster St., to the south and not shown, forms the neighborhood’s southern boundary. The image show how Interstate 95 and R.I. Rt. 6 form the Hill’s eastern and northern boundaries, respectively.