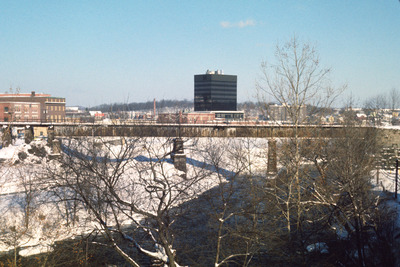 By 1970 Woonsocket was being referred to as a lost city (Providence Journal). In response the city entered a resurgence phase. The biggest change was the creation of a new downtown in the area known as the Social Flatlands. The black high rise in the center of this photo is the Marquette Building which was designed by Charles Seavor and Associates. Completed in 1975, this was the first new major office building constructed in the city in over forty years. It’s modern aesthetic and size served as the visual focus for urban renewal in Woonsocket during the 1970s.