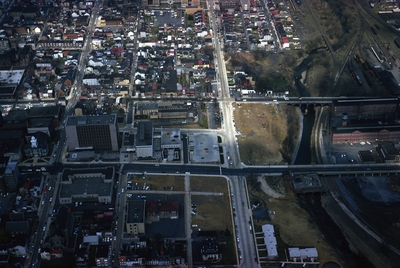 This photograph shows the the Urban Renewal Project area of Allentown before construction began. As in many cities, urban renewal in Allentown displaced many individuals and families. While Allentown did achieve some new apartment complex's, elderly housing, and municipal buildings, a 1973 moratorium on subsidized housing, signed by Preisident Nixon, left much of the city with large areas of vacant land where there had once been neighborhoods. In this photo the central blocks, bordered by Hamilton St. at the lower middle frame and W Linden St. at the upper middle frame, are the most changed areas. Where a neighborhood is seen in this photo the Allentown Art Museum expanded in 1975. The vacant lot at the left center of the frame is now the site of an office building that houses the Social Security Administration, and across the street is a state prison that opened in 1992.