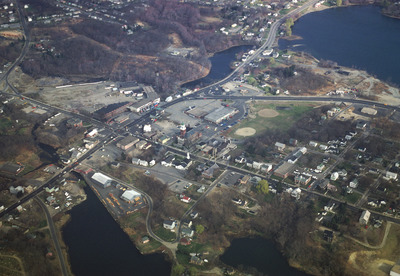 Apponaug is the center, or downtown, of Warwick, the second largest city in Rhode Island. Centered in this photograph is the City Hall, completed as the town hall in 1894, the city spent $75,000 to complete what is one of the most significant 19th century structure in the city. Other notable structures are the post office, police and fire headquarters, and a museum. Apponaug is also the junction of three of the cities biggest routes: Routes 1, 5 and 117. The area has a one way traffic pattern that was established in the 1960s to help the efficiency of automobile traffic, the pattern remains to the present.