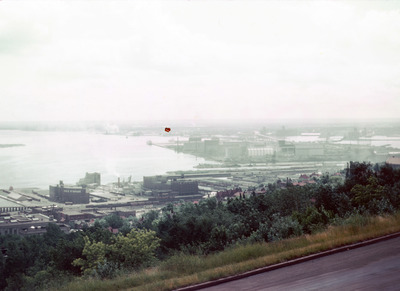 View of Superior Bay and Duluth likely taken at Enger Park or Enger Tower. Enger Tower is observation tower in Duluth that is made of blue stone and was dedicated in 1939 by Crown Prince Olav and Crown Princess Martha of Norway. Superior Bay is a hub of commerce for both Duluth and neighboring Superior, Wisconsin.